Ngāti Manuhiri are our local iwi. They have supported our school since it’s opening in 2009. They blessed the first sod that was turned when construction began in 2008. Our Maori name Te Manu o te Ngahere, was gifted by Ngāti Manuhiri when the buildings were blessed prior to opening. They also donated two significant awards for the male & female leaders of our Kapa Haka group. We appreciate their on-going support and advice.

Ngāti Manuhiri is an iwi from Mahurangi, whose rohe extends from the Bream Trail to the Okura River mouth on the North Shore, including the off-shore islands Hauturu o Toi, Kawau o Tu Maro, Panitiki and Hawere a Maki.

Ngāti Manuhiri is descended from Manuhiri, the oldest son of the great rangatira Maki from Kawhia. Manuhiri, along with his parents and fellow siblings, migrated from Kawhia to Tāmaki in the mid-1600s. They occupied whenua from Tāmaki to Kaipara on the west coast, then across to the east coast from Mangawhai in the north down to Takapuna. They also raupatu out to the offshore islands such as Hauturu o Toi and Aotea, where Manuhiri’s first cousin Rehua and his uri still maintain customary occupation today.

These happen every Friday, either in the courtyard or the hall, depending on the weather. Our intention is to provide a setting where children, teachers, and whanau can sit with whom they wish while they eat their lunch, building relationships and friendships. Feel free to pop down any Friday at 12:30 if you wish to be a part of this experience.

Our school waiata were gifted to us by Ngati Wai.  Ko te Manu was written especially for us and celebrates our school and specifically our whakatauki, while He Manu Rongo reflects our passion for and connection with birds. 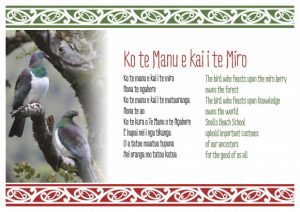 Kapa Haka practice takes place in the hall every Wednesday or Thursday lunchtime, and extra practices are held on Fridays after lunch.  For our waiata and haka lyrics, click on the links below:

Māori Word of the Week

Last year we had a hui with our Māori Whanau, and following some good kōrero, we established that in many cases we feel our children have a better understanding of the Māori language than we do as adults. For those you want to grow their understanding of Te Reo, each newsletter this year will include a “Māori Word of the Week”. These will then be collated on our website, under “Tikanga Māori” for you to refer back to if and when you wish. We thought we’d start nice and easy:

Have the visitors arrived? Yep